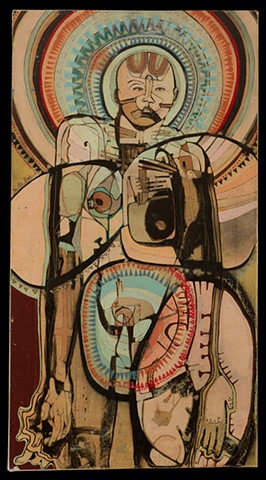 Ryan Ketchum is a self-taught painter who lives and works in Brooklyn, New York. His paintings, which are produced through a year-long process of sketching, repainting, covering and taping, are precisely delineated landscapes inhabited by postmodern Byzantine icons. Ketchum’s overt and vast visual references often seem as though he’s raided the storehouses of art history, and come up with one conclusion: painting is nothing if not a pursuit of the sacred object. The result is a series of multilayered, and often heavy, canvases that form a 21st century palimpsest, whose palettes of intensely hued pastels and textured, dark neutrals exist within structures that recall both medieval stained glass and the elaborate storyboards of comic books. His work has appeared at Diamonds and Oranges, Rabbit Hole Studio, Jungle Space, ANC, Pochron Studios, and the Brooklyn Artists Project Studio, among others.